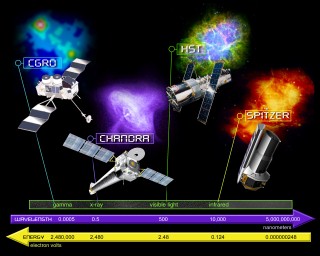 When space astronomy first started, it wasn't done at all wavelengths because you couldn't detect gamma-ray or submillimeter photons very well. The first instruments were in the ultraviolet and X-ray parts of the spectrum. Then gamma ray came in with the Vela satellites. Prior to the Vela program, itself a consequence of trying to monitor nuclear testing from the ground in the 1960s, had anyone proposed to NASA to build a satellite that could detect gamma-ray bursts from cosmic sources, it never would have been approved and would have been considered too outlandish an idea. Then, as a result of developments in detector technology, infrared joined the game and then submillimeter followed.

As a consequence of being human, we often only look for what we know is there. So now you've got astronomers clamoring to put specialized equipment from different wavelengths into space, even optical astronomers who traditionally have only used optical telescopes. All of this equipment needs to be above the Earth's atmosphere for the best results.

Hubble is an optical-ultraviolet-infrared telescope and the pictures, showing among the tiniest star images today, are just amazing. That is going to change with adaptive optics which will let us take images as good as Hubble's from the ground. We have arrays of small mirrors that can correct for the twinkling and turbulence in the atmosphere. Initially, the fields of view will be small, but technologies are being developed that will make them as large as Hubble's. The 30-meter class telescopes will come next, and, with the adaptive optics, will surpass the quality of the Hubble.