I went to public high school. I decided to go to Oberlin College and started out with a liberal arts education. Oberlin had an ancient six-inch refractor telescope that I never used. I guess I saw it once, while I was there, but didn’t pay any attention to it even though I majored in physics as an undergraduate. Then I went to graduate school at Harvard in physics, but with the intent of branching into astronomy. If you learn physics, you can do anything. Physics is a foundational science.

I ended up doing my thesis in gamma-ray astronomy, so I belong in gamma-ray history. The first thing I did as a graduate student was put a design together for a big, optical gamma ray light collector so that people would know what specs to put in the purchase request. I didn’t intend it to be the final design. The company that was building the collector was run by a TV repairman who had no optical experience at all, so they just built what I had designed that afternoon. 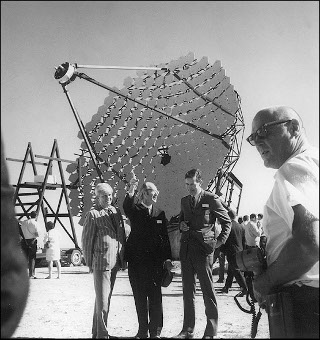 I remember we went on a factory tour to see how they were making the mirrors and other parts, and that’s how I discovered they had never checked my design. They just started making it. I was pretty freaked out when I found that out, but it worked! But it was early days. More than anything, I guess the moral of all this is that things were done in a really different style back then.

My thesis was based on this light collector that went on Mount Hopkins in Arizona and would pick up bursts of light made by air showers. When a cosmic ray hits the Earth’s atmosphere, it creates an air shower of many high energy fundamental particles. When you fly in an airplane, you’re getting bombarded by the cosmic ray radiation caused by these air showers. The idea was we could use the light bursts from the air showers to find the gamma ray sources because the gamma rays would go straight through space, whereas the cosmic rays, protons and electrons have electric charge, so they get deflected by the magnetic field in space. We thought if we just pointed at the right source, we’d see an excess of air shower counts from its gamma rays, on top of the counts from the cosmic ray air showers that came uniformly from every direction. The sources didn’t cooperate: we kept pointing and tracking, but never actually detected anything except lots and lots of cosmic rays.