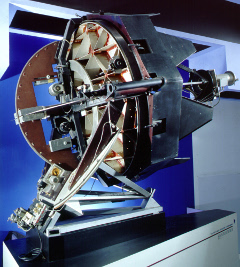 There was also a group at Caltech that we worked with pretty closely. There was an intense rivalry between the groups, but it is important to note that it was a gentlemanly rivalry. You loved beating the other group, and then you liked showing them how you did it so they could keep up. Frank Low’s company was an avenue for that because we could build a better piece of equipment and really beat them, and then they could go buy it. The University of Minnesota also had a group with whom we had good communication

To make a ground-based, optical telescope work in the infrared, you have to change various aspects of its design. Any object, like a telescope, at room temperature emits infrared radiation. The infrared radiation from a source in space has to compete with the infrared radiation coming from the telescope itself. Looking for an infrared star is like trying to find a match in a blast furnace. You’ve got all the infrared light from the warm telescope pouring in on you, and it can be a hundred thousand, a million times brighter than what you’re looking for. You have to take out all the baffles that block visible light but emit a lot in the infrared, although this only helps a little. So you also need to add a way to measure the telescope signal almost continuously, because tiny changes can overwhelm the signal from the astronomical source. Frank had found the best way for that was to tip the telescope secondary mirror to move the source image on and off your detector about 20 times a second!