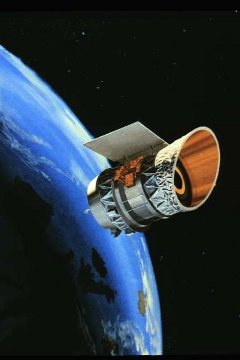 IRAS in Orbit: The artist's rendering shows the Infrared Astronomical Satellite (IRAS) in its 560-mile-high, near-polar orbit above the Earth. From this vantage point, IRAS searched the sky for stars and other infrared-emitting sources, unhampered by the obscuring effects of Earth's atmosphere.
Credit: NASA/JPL-Caltech

After arrays the next big technology shift for infrared astronomy was having cold telescopes in space. The first really successful cold telescope in space, the Infrared Astronomical Satellite, or IRAS, actually used individual detectors rather than detector arrays. It had a number of them, but they were really used one detector at a time. I referred to the fact that if you tried to detect an infrared astronomical object from the ground, the background light on your detector from the room-temperature telescope will be a thousand to a million times greater than the astronomical object. If you try to cool down a telescope from the ground, so the telescope won't glow as brightly in the infrared, water and everything from the atmosphere will just condense on it, so you can’t do that. But you really would like to do infrared with a cold telescope, because that reduces all this heat radiation that otherwise bothers you. If you get into the vacuum of space, you can cool the telescope down and get a huge gain in sensitivity. IRAS detected about 500,000 infrared sources, far more than had been known before.

After IRAS, there was the European Infrared Space Observatory, ISO mission; the Spitzer Space Telescope; Akari (a Japanese mission); the Wide Field Infrared Survey Explorer, WISE; the Herschel Space Observatory; and in a few years, the James Webb Space Telescope, or JWST. There’s this succession now of cold telescopes in space that are the real discovery machines in the field. That’s not to say that you can’t do something useful from the ground; there are unique things you can do from the ground also, but I think the space missions with cold telescopes have really fueled the discovery potential that you can then follow up on with ground-based telescopes. That follow-up can often be done with higher spectral and spatial resolution available with telescopes on the ground, tools that are needed to better understand a source in detail. But the space missions have been the real engines that show us whole new classes of infrared astronomical objects.

The problem with the space telescopes is they have all been small to make them easier to launch – less than 3 feet in diameter. The result is that they have poor resolution – they can’t see the details in the sources they look at. A good example where the ground and large telescopes win out involves the search for planets around other star systems, a search that will certainly change our view of the Universe. There is a substantial problem imaging planets next to stars because the planets are really close and the stars are so much brighter. There are techniques for obtaining high resolution on the ground that involve correcting for atmospheric blurring (this works best in the infrared). We can now take full advantage of huge telescopes with mirrors 30 feet in diameter, showing detail ten times smaller than with 3-foot-diameter space telescopes. However, there is a trade-off because correcting for the atmosphere requires methods that limit your searches to bright stars.