In terms of the instrumentation, we didn’t exactly stand still, but for the first decade or so we worked with single detectors. Those single detectors could only look at a single spot on the sky; to make maps we scanned the telescope with its single detector across the sky and built up an image of the area. What we really needed was a grid, or "array", with lots of detectors, that could look at many spots on the sky simultaneously, that we could really take pictures with. There were no useful arrays of detectors. The only ones we could have were ones we could just build ourselves one detector at a time. But prototypes of many, if not most, of the objects that are still being studied in the infrared were found during that early period, even with the single detector instruments. For many of them, the prototypes were quite bright, so if you just waved your telescope at them, you’d find them. 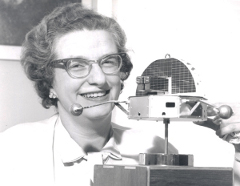 Nancy Roman: Dr. Nancy Roman, one of the nation's top scientists in the space program, is shown with a model of the Orbiting Solar Observatory (OSO) in 1963.
Credit: NASA

We were in the right place at the right time. We got the field started with this very primitive equipment, and this culture that was built among the several research groups that I have mentioned. It was a pretty robust field, and by the mid-1970s other astronomers could see there was a lot of interesting stuff there. Nancy Roman, who led astronomy efforts at NASA, no longer had to sneak money out of NASA headquarters in unmarked envelopes. That wasn’t quite what she did, but you get the point. Now we could send proposals out to all different kinds of astronomers for them to review, and they would say, oh yeah, infrared is good stuff.

Despite the progress, we needed something dramatic to make more discoveries. In the early 1980s, the very first arrays of detectors started to leak out of the aerospace industry. They’d been developed for military purposes, such as taking pictures of rockets or airplanes, or for Earth resources satellites that look down to study the Earth instead of looking up at the sky. As an example of their uses, if you fly over a section of Earth, it becomes really obvious what sort of plants you have if you do spectroscopy in the infrared and see how the light is distributed in wavelength. Satellites with infrared cameras can, for instance, find fields of marijuana. Chlorophyll has very strong absorption features, as another example. You can study the kind of vegetation by looking at the images in the infrared. Infrared is more useful than you thought, isn’t it?