An idea that has been transformational for studies of our greater Universe is that there are galaxies that make most of their energy in the infrared. It turns out that the most luminous, biggest galaxies tend to fall into this category, so if you want to study how really big galaxies like elliptical galaxies form, you have to look in the far infrared to find the ones that are really the most important for that study. We found some examples early, IRAS found many thousands of such galaxies, and ISO, Spitzer, Akari, WISE, and Herschel have all added to the total.

Looking at a galaxy in the infrared can tell us how many stars it’s forming. It turns out stars form in molecular clouds, and in addition to molecules, the clouds are also full of dust. The dust absorbs virtually all of the starlight. Doing so, it warms up and emits in the infrared. If you can measure how much infrared energy is coming out of this heated dust, you can then go back and figure out how many stars had formed in the galaxy that produced that energy in the first place. The dust can be so thick that it blocks all the visible and blue light, so people didn’t even guess that there were stars forming there. The galaxies just looked awfully dusty. 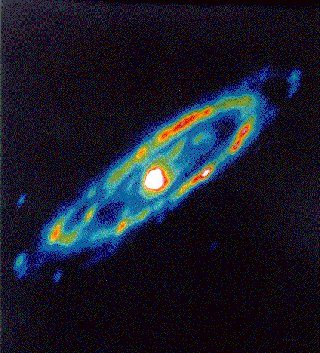 Andromeda: This image of the Andromeda galaxy is made up of observations by the Infrared Astronomical Satellite (IRAS). The white and yellow areas represent areas where young stars are likely forming.
Credit: NASA/JPL-Caltech