From Gamma Ray to Infrared

Times have changed a bit. Gamma-ray astronomy in those days was kind of a depressing field. I got a Ph.D. from Harvard without detecting a single gamma-ray photon. The field just wasn’t ready then. Every new spectral region in astronomy got started because there were visionaries that went out and looked for something. For most kinds of light, real astronomical sources were a hundred times brighter than what they were looking for, except gamma rays, where the real sources were a hundred times fainter. So theoretical predictions were way optimistic, and that’s why it took so long for gamma-ray astronomy to actually get going in a productive way. It was a constant disappointment, but in the last 20 years it has come into its own as a new field. 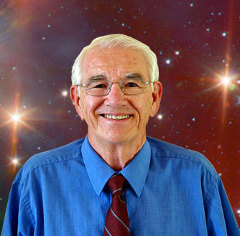 Through a crazy chance, I got hired right out of gamma-ray astronomy into infrared astronomy. The chance was that I was working on something with Frank Low, who was at the University of Arizona. One day he was having a very loud argument with somebody over the telephone. I picked up in the course of the argument that it was with Carl Fichtel, who was a gamma ray astronomer at the NASA Goddard Space Flight Center.

It just so happened that at the time I had a job offer from Fichtel, so when I went in to talk to Frank I said, “That’s ironic. That’s probably the guy I’ll be working for in a few months.” And Frank responded, “Oh, you’re looking for a job? Would you like to come work for me?” I was committed to the job with Fitchel, but it fell through and I took the job as a post-doc working with Low. It was in infrared astronomy, so I had to learn the field very fast.

The job with Low was a happy accident, but I thought that if I changed fields it would make me a much better scientist in the end. I was absolutely right. I think that way too often people learn a narrow specialty and stay with it for their entire career, redoing their thesis continually. I certainly couldn’t redo my gamma-ray astronomy thesis by going into infrared astronomy. Astrophysics is a form of physics so one can get into it by studying physics; with a physics background, one can always change fields and go into other areas, especially into other areas of astrophysics.

Physics lets you pick up and run with something new. There are only a few other opportunities to focus on something that gives you a background you can apply in more ways than one. Mathematics is another discipline that’s sort of a foundational set of knowledge that can be applied in lots of different ways and opens up all kinds of possibilities.