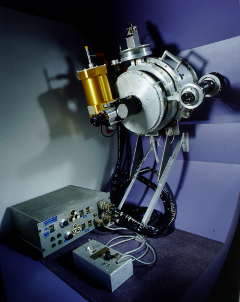 Infrared Telescope: The original 12-inch infrared telescope that was flown on a Learjet in the 1960s and 1970s. It was built by Frank Low and his students at Rice University using a range of bolometric detectors.
Credit: Smithsonian Institution, National Air and Space Museum

I fled from gamma rays to infrared in 1970. Infrared astronomy only got started in 1963 or 1964, so it was a very immature science. It was an interesting time because we didn’t have very fancy equipment, but the sky was super-saturated with new things to look at. It’s fun for me to think about how this all happened.

We would build things in the lab. Frank Low had actually established a company that sold equipment to anybody who wanted to do infrared astronomy. After we built the equipment, we would just put it in the back of a truck, and I would drive it up to one of the local telescopes and put it on. I would drive and mount the equipment by myself. In fact, I had basically no experience with optical telescopes, because that’s not what you use for gamma rays. Frank somehow had a huge amount of confidence in me, probably more than he should have.

The first time I went observing he just drew me a map of how to find the telescope and wished me luck. When I got to the site, I found there were two telescopes, and I didn’t know which one was mine. I finally found somebody and asked him, but it was kind of a weird experience to be so raw that you get up there with this big truckload of equipment and you have to put it on a telescope but don’t know which one you should put it on. That first observation was a bit bumpy, but it didn’t take long to learn how to run the equipment and then start improving it.