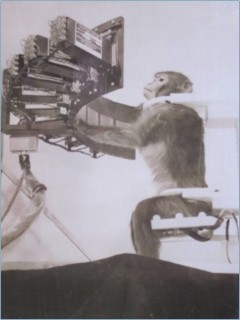 Electronic Game for Monkeys: Image of the electronic game for Monkeys that Blair Savage helped design and build during his industrial cooperative experience with the Cornell University Engineering Program.
Credit: Courtesy of Blair Savage

Before entering my last year in high school, I was very seriously thinking about what I would do next in order to prepare for my future. I for sure knew I was going to have a career path in science or engineering or some mixture of the two, but I didn’t know what the specific mixture would be. Looking around at schools out east, and considering the engineering schools and the science schools, I decided to go to Cornell University. They had a program called Engineering Physics, which is a blend of engineering, physics and mathematics. Nowadays, schools would call the program Applied Physics, which involves doing practical things with one’s knowledge of physics. The program seemed ideally suited for my interests. I was accepted into the program and was very pleased to obtain a scholarship to cover my tuition expenses.

I received a fantastic education at Cornell. It was very hard work, but actually getting things done in the world requires very hard work. The program strongly emphasized the great importance of understanding the underlying physics and mathematics when pursuing engineering research. It was a five-year program back then, which had a real advantage: In a five-year program you can spend more time shopping around to find a potential career path. The five-year program gave me the time to consider the astronomical sciences as a possible career direction. I easily could have gone to industry as an engineer instead.

As part of the undergraduate experience, I participated in Cornell’s Engineering Cooperative program. Today these are called industrial internship programs. For the equivalent of three semesters, I worked in industry so I could begin to understand what engineers and scientists do in the industrial research environment. I worked for the General Electric Advanced Electronics Center in Ithaca, New York. It was a very interesting and valuable research experience. It also paid well and helped me cover many of my college room and board expenses.

I worked in what was called the Bionics Unit, where experimental biologists were working with engineers and physicists in order to try to understand the physical basis of different kinds of biological processes that might have important industrial applications. For one semester I helped operate the apparatus for an experiment to determine if working in an ionized environment impacted human performance. During the last two work semesters, I helped to build an electronic game for rhesus monkeys that could be used to study the performance of monkeys when subjected to radar radiation. The project was funded by the Department of Defense to better understand the safety issues for humans working at military radar facilities.