While at Cornell, I decided I wanted to connect with the rapidly developing arena of space astronomy, involving placing instrumentation above the Earth’s atmosphere. I was looking around at different institutions for enrolling in graduate school and I realized that Princeton University was very actively involved in space astronomy in several different ways because of the presence of Martin Schwarzschild and Lyman Spitzer on their faculty. I applied to the Princeton University graduate program of Astrophysical Sciences and was accepted. 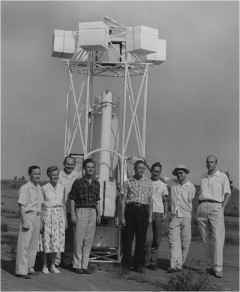 Balloon-borne Stratoscope I: Martin Schwarzschild initiated a series of balloon flights in 1957 to image the solar granulation at 24,000 km, above the blurring effects of Earth's atmospheric, commonly referred to as atmospheric seeing. He used an accurately figured 30 cm mirror to achieve 0.4 arcseconds angular resolution compared with 1 arcsecond normally possible from the ground. Pictured in the photograph is the Stratoscope team including three of the principal scientists: Martin Schwarzschild and Barbara Schwarzschild (far left), Don Morton (fourth from the left), and Jack Rogerson (fifth from the left).
Credit: Courtesy Blair Savage / US Navy 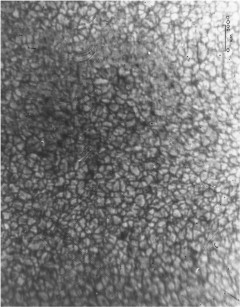 High-resolution Imaging of the Sun: The Stratoscope I images revealed the properties of convection cells in the solar photosphere. The scale bar in the upper right is an angular size of 1 arcsecond at the Sun's surface. For more information about this image see Schwarzschild, M. 1959, ApJ, 130, 345.
Credit: Reproduced by Permission of the AAS

Martin Schwarzschild at Princeton had developed a balloon-borne telescope in the late 1950s and early 1960s, the Stratoscope I. It was an optical telescope of very high quality. He was interested in obtaining high-definition imagery of the outer atmosphere of the Sun where convection occurs. Attempts to photograph that phenomenon from the ground produced pictures that were so blurry that you couldn’t adequately see what was going on. So, he produced his balloon-borne telescope and sent it into the stratosphere to an altitude of about 80,000 feet and used it to attain high-resolution images of convective phenomena in the solar photosphere. He was a theoretical astrophysicist, actually, working on the internal structure and evolution of stars but also pursued a major experimental program in astronomy from high flying balloons. After observing the Sun, he decided to move on to observing fainter objects that were visible at night and started the Stratoscope II program.

Lyman Spitzer, also a theorist, had started a second program in ultraviolet space astronomy in the early 1960s including a program to use sounding rockets to obtain ultraviolet spectra of hot bright stars and a program to build a major Orbiting Astronomical Observatory (OAO) to study the composition and physical state of the interstellar medium (ISM) between the stars. The OAO was to be the third in a series of ultraviolet observatories and was designated as OAO-C. As part of the OAO-C program Spitzer obtained the funding to support a laboratory astrophysics program to measure important atomic parameters for the atoms he wished to study in the ISM at UV wavelength.