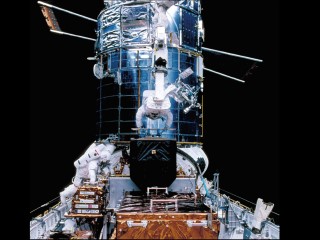 The Final Hubble Space Telescope Servicing Mission: The space shuttle servicing missions of the HST allowed the replacement of scientific instruments and other observatory parts with a limited lifetime, such as gyroscopes and batteries. The ability to services the HST has greatly extended its orbital lifetime to 24 years in 2014.
Credit: NASA

Lyman Spitzer first wrote about the research possibilities of a large space telescope in 1946 in a famous report from the RAND Corporation entitled “Astronomical Advantages of an Extra-Terrestrial Observatory”. His space astronomy efforts in the subsequent 25 years involving Schwarzschild’s Project Stratoscope I and II and his own involvement in UV spectroscopy from sounding rockets and from the Copernicus satellite eventually led to a major push by him and others to build a much larger satellite observatory that eventually became the Hubble Space Telescope with its diffraction-limited 2.4-meter mirror. It was difficult for Spitzer to first sell the idea to the astronomical community. It was clear that a large space telescope would be very expensive. In the 1960s and 1970s most astronomers were ground-based astronomers and thought the money would be better spent building less expensive, large, ground-based telescopes. They only slowly accepted the basic fact that the NASA money for space astronomy projects could not be converted into money for ground-based telescopes.

Funding to build the HST started in 1977 and the observatory was finally launched into orbit by the space shuttle in 1990. The first few years of operations did not go well because an error was made in the figuring of the primary mirror, which resulted in an incorrect shape and blurry images. Fortunately, the HST was designed to be serviceable in orbit through occasional visits by astronauts aboard the space shuttle. The effect of the primary mirror shape error was corrected in 1993 by the addition of corrective optics in front of the scientific instruments. At that stage the HST began to deliver the extremely clear visible light images originally expected for a diffraction-limited, 2.4-meter observatory above the blurring effects of the atmosphere. Over the subsequent 20 years the HST has revolutionized the field of high resolution optical imagery of celestial objects and has excited the public about the wonders of the Universe through the continuous release of one amazing image after another.

Less well known is the fact that the HST is a multi-frequency observatory. Over its more than two decades of operations the HST has contained many instruments designed to produce high-definition, visible light images in addition to high-definition, near-infrared images. However, the suite of instruments on the HST over its long lifetime has also included four different ultraviolet spectrographs named the Faint Object Spectrograph (FOS), the Goddard High Resolution Spectrograph (GHRS), the Space Telescope Imaging Spectrograph (STIS) and the Cosmic Origins Spectrograph (COS). STIS and COS are currently aboard the HST and continue to operate well.

The HST UV spectrographs have been used to continue to exploit the large diagnostic potential of the UV for exploring the physical properties of astronomical objects and for studying the matter between the Earth and the stars. The spectrographs have allowed the study of the UV properties of very faint astronomical objects including very distant QSOs at both low and high spectral resolution. The more modern UV spectrographs aboard the HST contain UV, photon-counting detectors, which have much higher efficiency than those operated in the 1970s. Compared with IUE, HST has a much larger mirror and a much higher effiiency for spectroscopy. HST can therefore be used to observe much fainter objects, probing much deeper into the Universe than ever before.

In my own area of research the HST has allowed a very accurate assessment of the chemical composition of the interstellar gas along with continued studies of the distribution of the ISM away from the plane of the galaxy into the galactic halo. As the UV spectroscopic instruments became more sensitive it became possible to use distant QSOs as the background sources in order to begin to study the distribution of matter in between the galaxies. This intergalactic medium (IGM) contains most of the normal matter in the Universe and plays a major role in the formation and evolution of galaxies. The gas in the IGM, as in the ISM, occurs in different phases including cool, warm and hot regions. Determining the properties of these phases and their distribution in space requires observations at UV wavelengths. QSOs can be used to study the IGM just as stars are used to study the ISM in the Milky Way.

A wonderful aspect of studying very distant objects in the Universe such as the extremely luminous QSOs is that the path to each object probes the evolution of the Universe over enormous periods of time. Some of the QSOs observed in the UV by the HST are at distances ranging from one billion to nine billion light years. The changing properties of the absorbing gas clouds with distance can be determined from these spectra, thereby permitting studies of the evolution of gas in the Universe over nine billion years. For instance, scientists use ice core samples obtained in the Earth's polar regions to explore the history of the Earth's atmosphere over hundreds of thousands of years. In an analogous way, HST observations of the gas toward very distant QSOs provide a core sample of the Universe over the billions of years of its life.