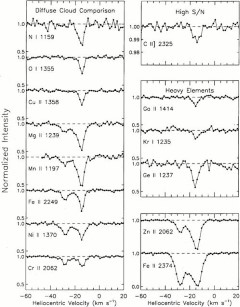 Interstellar Medium (ISM) Absorption Lines Toward ζ Ophiuchi: A sample of ISM absorption lines observed by the Goddard High Resolution Spectrograph toward ζ Ophiuchi. Each spectral strip only represents about one-quarter of an Ångstrom. At this high resolution we discern two clumps of gas. There is a persistent feature (dip) at -15 km/s. In some of the spectra, there is another dip to the left at -28 km/s. Compare that to the spectra of UV extinction curves, which typically cover 3000 Å, such as the one on page 11, or molecular hydrogen spectra which typically represent 8-15 Å, such as the one page 12. For more information see Savage, B. D., Sembach, K. R. 1996, ARA&A, 34, 279.
Credit: Image courtesy Blair Savage and Annual Review of Astronomy and Astrophysics

Most of the early UV satellite observatories contained instrumentation designed to produce UV spectra of astronomical sources. In those early days, suitable UV radiation detectors for obtaining high quality two dimensional images did not exist. An instrument containing such a detector, known as Celescope, was flown on OAO-2 but it didn’t work very well. At those early times obtaining good UV spectra was easier than obtaining good UV images.

The emphasis on UV spectroscopy also recognized the tremendous diagnostic potential of the UV for obtaining new insights about astronomical phenomena. Most atoms and molecules very strongly absorb radiation at UV wavelengths. UV radiation does not penetrate to the surface of the Earth because of very strong absorption by O3 (ozone) and O2 (molecular oxygen). In order to determine the elemental abundances in the cool interstellar medium that does not emit much radiation, it is necessary to measure the amount of C, N, O, Si, S, Fe, and P through the absorption lines produced by various ion states of these elements. These abundances are determined by measuring the strengths of interstellar gas absorption lines, such as the two absorption components in the spectrum of ζ Ophiuchi.

It was very clear to most astrophysicists at the time that UV spectroscopy of astronomical objects would yield tremendous new insights about those objects. Hot stars emit most of their energy at UV wavelengths. In order to understand hot stars and their high-speed winds it is necessary to observe in the UV. Cool stars have outer, thin atmospheres heated to high temperatures, known as stellar chromospheres and coronae. Those tenuous atmospheres only become evident at UV wavelengths. The most important molecule in the ISM is H2. It can only be observed in the cold ISM through its UV absorption. The hotter phases in the ISM with temperatures ranging from 100,000 (105) to 1,000,000 (106) degrees Kelvin (K) are easily revealed by O+5 absorption with its lines at 1031 and 1037 Å, and the list goes on.

As sensitive, high-quality, two-dimensional UV detectors of radiation became available, astronomers began to wish there was an all sky imaging survey in the UV. Such a survey would be extremely valuable for selectively identifying, and then studying the distribution of, the hot, UV-emitting stars in galaxies. Such a mission was finally accepted and flown in 2003 and operated for 10 years. It was the Galaxy Evolution Explorer (GALEX). With a modest weight of only 280 kg, the satellite was launched on a small Pegasus rocket. The GALEX project directed by Chris Martin of California Institute of Technology produced high-quality, UV imagery of the entire extra-galactic sky, revealing young and old hot stars and their distributions in all classes of galaxies allowing the study of the rate of star formation in each galaxy.