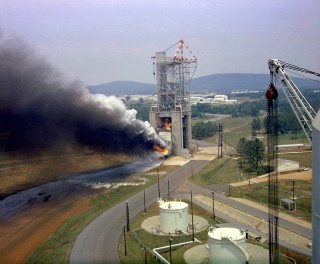 Apollo Program Saturn V F-1 Engine Testing: This photograph depicts a test firing of an F-1 engine in the west test area of the Marshall Space Flight Center. This engine produced 1,500,000 pounds of thrust using liquid oxygen and RP-1, which is a derivative of kerosene. The F-1 engine was used to launch the Saturn V launch vehicle to the Moon during the Apollo program.
Credit: NASA/MSFC

When I was doing my undergraduate work at Cornell, NASA started running a number of summer programs to get college students interested in pursuing space science as a career. I attended a summer program led by Robert Jastrow of the Goddard Institute for Space Studies at Columbia University. The program lasted for six weeks and involved coursework in astronomy, astrophysics, and the physics of planetary atmospheres. The latter part of the course was a great introduction to the physics of the greenhouse effect and the origin of the Earth’s ozone layer. The program ended with a tour of NASA facilities including the Marshall Space Flight Center in Huntsville, Alabama and the now-named Johnson Space Center in Houston, Texas. The Marshall Space Flight Center visit was pretty amazing because I was able to witness from a relatively short distance the test firing of a major rocket engine for the Apollo Moon mission.

After the NASA introduction to the space sciences, I began to take elective courses in astrophysics at Cornell to see if astronomy and astrophysics might be a good career choice. I was really suspicious of astronomy and astrophysics as an actual career path. I wondered about simple questions like: Where would I work? Could I actually get a job as an astronomer? I must admit, that was a time when astronomy as a field was not very well respected by physicists; many physicists looked down on astronomers as “lesser scientists.” Astronomy was fairly old fashioned in the way it was operating. I certainly got this feeling when I started mentioning the possibility of a career in astronomy to the physics faculty at Cornell.

Starting in about the mid-1960s, physicists become interested in the fact that there was an enormous discovery potential for learning new physics through astronomy and astrophysics. That’s when the cosmic microwave background radiation was discovered. That's when cosmology became an experimental science rather than simply a theoretical science. That's when pulsars were discovered and created the opportunity to study extremely compact stars. Imagine taking an object the size and mass of the Sun, and squeezing it down to the size of an object 1000 times smaller than the Earth. Then, you would have a neutron star with an incredibly high density that could be used to test the laws of physics under extreme conditions. Pulsars were the first direct evidence that neutron stars, stars of incredibly high density, existed.