UV Sounding Rocket Spectra: The first UV stellar spectra with enough spectral resolution to show absorption lines in the spectra were obtained by Don Morton and Lyman Spitzer in 1965. They used a small UV spectrograph on an Aerobee sounding rocket that rose above the atmosphere for several minutes. The two spectra, π and δ Scorpii, are smeared together because of drifting in the rocket guidance system. The wavelength scale for the π Sco spectrum is below on the left and the scale for δ Sco is below and to the right. For more information about this spectra, see Morton, D.C., Spitzer, L. 1966, ApJ, 144, 1.
Credit: Courtesy D. Morton and Reproduced by Permission of the AAS

During my first two years at Princeton, I was involved with measuring, in the laboratory, the intrinsic strengths of UV atomic transitions of abundant elements including oxygen (O), carbon (C), nitrogen (N), silicon (Si), iron (Fe), and phosphorous (P). I pursued these studies under the direction of George Lawrence, a young experimental physicist. The very complex apparatus of the UV experiment was set up in the basement of the old Princeton University Observatory. It was through that work that I developed a very great interest in astronomical spectroscopy and particularly UV spectroscopy.

George's program was one of the first laboratory astrophysics programs in the world. The three programs at Princeton: the laboratory program, the sounding rocket program, and the Stratoscope program, laid the groundwork for future ultraviolet satellites.

I also took graduate courses in physics and astronomy at Princeton during this time, however, it was made clear to me that my research projects were more important than the course work. To de-emphasize course work, the graduate students were never told the grades they achieved in the different courses. All the courses were treated on a pass/fail basis. I had courses from some of the great astrophysicists and physicists of the 20th century including Robert Dicke, Martin Schwarzschild, Lyman Spitzer, and John Wheeler.

My favorite course of all time was Lyman Spitzer’s course on the physical processes operating in the ISM. I distinctly recall an interesting homework assignment given during the course. Professor Spitzer asked: If you had access to a 1 meter class orbiting astronomical observatory containing a high resolution UV spectrograph operating between 900 and 2000 Å, what observations would you carry out in order to obtain new insights about the physical state of the gas in the matter between the stars?

I recall I responded by describing a program to study the absorption produced by abundant atoms in high stages of ionization including O+5 (five-times ionized oxygen), N+4 (four-times ionized nitrogen), and C+3 (three-times ionized carbon) toward hot UV emitting stars. These ions have absorption lines near 1032, 1038, 1238, 1242, 1548, and 1550 Å. The strength of the absorption gives information about how much of each ion exists in the ISM and the width of the absorption line contains information about ion motions in the interstellar clouds producing the absorption. Such an observing program would provide information about hot highly ionized gas in the ISM. I didn’t know at the time but I would continue to pursue such a program for most of my professional life. In fact my most recent research paper, published in 2014, reports on the physical properties of O+5 in the intergalactic medium. 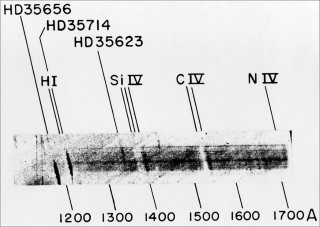 UV Sounding Rocket Spectrum: Four months after the above spectrum was captured, Morton obtained a higher quality UV spectrum of hot stars in Orion. The UV spectrum of ζ Ori revealed extremely strong absorption lines of three-times ionized silicon(denoted in the image as Si IV) and three-times ionized carbon (denoted in the image as C IV). These broad, white tilted features indicate the presence of a high-speed, outflowing stellar wind with velocities of 1800 km/s and imply a rate of stellar mass loss of one solar mass every one million years. At this rate, the stars would blow themselves apart in a few tens of millions of years. This fact was a major discovery from the early days of ultraviolet astronomy. The black streaks labelled by star names, e.g., HD35656, are due to other stars in the field of view during the flight. For more information about this spectrum, see Morton, D. C. 1967, ApJ, 147, 1017.
Credit: Courtesy D. Morton and Reproduced by Permission of the AAS