You have a stupendous laboratory out there in the Universe, and we cannot possibly replicate the conditions on Earth that we have out there. You can study physical phenomena under really extreme conditions and learn how these phenomena work. I realized the importance of astronomical studies for advancing physics near the end of my program at Cornell. The biggest motivation I had for moving over to astronomy was the realization that the ongoing technological revolution that we were in had profound implications for the future discovery potential in astronomy.

Three revolutions were occurring at the same time: First, there was access to space, allowing you to study astronomical objects across the entire electromagnetic spectrum. Second, computers were being invented and advanced at a phenomenal rate. Computers allowed observers to collect and manipulate data and theorists to create simulations of astronomical phenomena. Then, the third major ingredient would be the development of very sensitive radiation detection devices for both imaging and spectroscopy. All of those three coming together created an absolute explosion of information about the Universe. It’s still just as hard to figure out what it all means, but you can benefit from having access to the information being provided by all of these new capabilities. 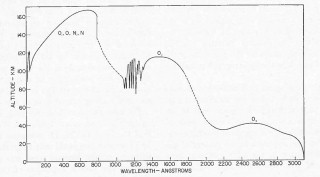 There’s an interesting analogy that I think is quite valid: suppose you have a six-chapter novel, and it’s an interesting story but very complicated. Someone has gone in and has cut out chapter 1, chapter 3, chapter 4 and chapter 6, and you’re trying to figure out what the story is from the two of chapters you have. The astronomers, limited by their instruments on the ground, are reading a novel missing most of its chapters. With access to observatories above the Earth’s absorbing atmosphere, it becomes possible to read all the chapters of the novel and to begin to understand the story being told by the electromagnetic radiation coming from the Universe.