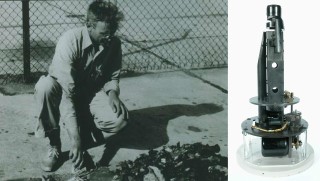 It didn’t happen all at once, but slowly, and in different areas of the spectrum at different times, we acquired the ability to observe all ultraviolet wavelengths from space. We now have space observatories operating across the entire electromagnetic spectrum including the gamma ray region; the X-ray region; the ultraviolet region, which I mostly work in; the visual region; the Infrared region; and the microwave region. Visual wavelength and long wavelength radio astronomy are still being done mostly from ground-based observatories and a lot of work is also being pursued from the ground in parts of the infrared spectral region.

The earliest astronomical observations from above most of the absorbing atmosphere of the Earth were obtained in 1946 when Richard Tousey and colleagues from the US Naval Research Laboratory flew a simple UV spectrograph mounted in the tail fin of a German V-2 rocket to an altitude of 55 km. They obtained UV spectra of the Sun at different altitudes revealing that very high altitudes are required to obtain UV observations of objects beyond the Earth. At the altitude of 55 km when the V-2 rocket was above most of the absorbing ozone layer of the Earth’s atmosphere, they obtained measures of the Sun’s spectrum down to 2200 Ångstrom (Å). Tousey’s instrument was the first space telescope. Subsequent progress was slow because of the lack of suitable rockets for going to higher altitudes until the late 1950s. 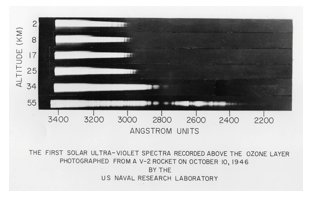 The First Solar Ultraviolet Spectra Recorded above the Ozone Layer: Richard Tousey and collaborators at the Naval Research Laboratory flew a UV solar spectrograph on a German V-2 rocket in 1946 and recorded the solar spectrum at different altitudes up to 55 km. At the lower altitudes (2, 8, 17, and 25 km), ozone in the upper atmosphere absorbed the solar UV radiation below 2800 Å; the spectrum to the right of 2800 Å is missing entirely in the spectra taken at those altitudes. At the highest altitutde reached, 55 km, the solar spectrum was recorded down to 2200 Å. This marked the beginning of UV astronomical observations from above most of the Earth’s atmosphere. For more information, see Baum, W. A., Johnson, F. S., Oberly, J. J., Rockwood, C.C., Strain, C. V., and Tousey, R., Physical Review, 70, 781, 1946.
Credit: ©2015 by the American Physical Society.