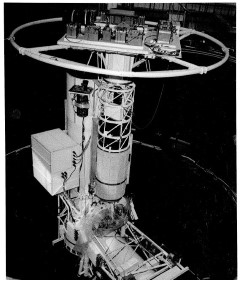 Stratoscope II in a Vacuum Chamber: Stratoscope II underwent extensive environmental testing in a vacuum chamber at Valley Forge, Pennsylvania after flight failures in 1965, 1966 and 1967 due to mechanical problems.
Credit: Courtesy Blair Savage/PerkinElmer

I joined the Stratoscope II program in 1967 and participated in flights 6 and 7. Because of the failures of flights 3, 4, and 5, the Stratoscope team was required by NASA and the National Science Foundation (NSF) to subject the telescope to environmental testing at a large vacuum test facility in Valley Forge, Pennsylvania. I participated in that testing. During the very first near-vacuum test where the pressure in the chamber was decreased to that expected at 80,000 feet, a new problem was found. The telescope floated on a mercury bearing in order to make the rotation in azimuth very smooth. However, mercury freezes at -39° C while the temperature at 80,000 feet is -52° C. Therefore it was necessary to insulate the mercury bearing and to heat the mercury. When the pressure in the chamber was reduced by a factor of 36, the foam insulation expanded and restricted the telescope rotation. The problem was soon solved. Ground-based environmental testing is now a standard part of the preparation of scientific payloads for launch.

My involvement with Stratoscope II was brief but very exciting. During two launches, I operated the observatory from a control van located down wind of the Palestine, Texas launch site. The telescope was launched before sunset and operated for the night and then returned to Earth by releasing helium (He) from the huge balloon that carried it aloft. During the night, it was necessary to perform many tasks via remote control, including: unlatching the telescope, opening the mirror door, pointing the observatory at the first target, identifying the target using the on board TV system, acquiring guide stars for the image stabilization system to lock onto, focusing the telescope and aligning the telescope using the light from a bright star, moving to the scientific target of interest, obtaining many exposures recorded on film of the scientific target using different filters situated in a rotating filter wheel, and repeating all of this on different focus stars and scientific targets until the night ended 9 hours later and the sky background brightened. At that time the telescope was moved to the vertical launch position re-latched and returned to Earth by the release of helium (He) from the balloon resulting in a controlled balloon landing. 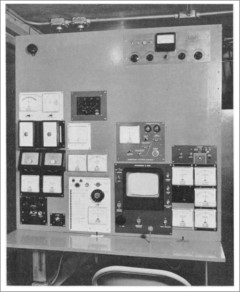 Stratoscope II Operations Control Room Situated in a Truck Along the Flight Path: The control room was used to communicate with the robotic observatory, monitor observatory status, unlatch the telescope at altitude, open and close the mirror door, move to the correct azimuth and elevation, balance the telescope, find the guide stars, establish servo system guide star lock, focus and align the optics, record scientific images on film, moves to the next objects in turn, and finally release helium from the balloon for a controlled descent back to Earth. For more information about Stratoscope II, see Danielson, R. E., AmSci, 51, 375.
Credit: Image courtesy American Scientist

With my background in photograpy, I was responsible for processing the 70-mm roll film used for recording the Stratoscope II observations. The processing was done in total darkness by cutting the film into 70-cm long sections and using tall developing tanks. The processing was stressful given the huge effort expended to prepare the observatory to acquire the exposures, but it was successful. The end result was the first very-high resolution images of planets and the nuclei of galaxies from a remote-controlled, night-time observatory located high above the blurring layers of the Earth’s atmosphere. Film was used to record the Stratoscope II observations because in the late 1960s highly sensitive electronic detectors of light were just being developed in the lab and were not yet available for use in space. That timing was unfortunate because much more could have been accomplished with Stratoscope II with an electronic detector.

The main thing that the Stratoscope II program accomplished was to demonstrate that a very complex remote controlled observatory designed for diffraction limited imaging could be successfully operated and pointed to high precision in the space environment to obtain high quality images of celestial objects. That was extremely important for the subsequent push by people like Lyman Spitzer and John Bahcall for creating a large version of the same thing in Earth orbit (the Hubble Space Telescope).